Posted in Hug-Witschi | Comments Off on Gratulation nach Schwarzenburg!

The Swiss mobile operators are not ready yet for the iPhone launch, because there are almost no attractive data tariffs available. 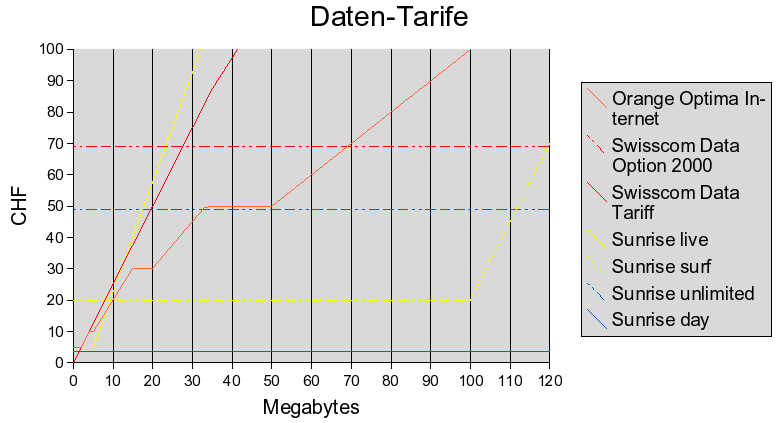 I’m cleaning up old harddisks in my vintage PCs and found a DOS partition that I used solely to run the emulator S3AEMUL for the Psion Series 3a. This emulator was once available for free: a clever marketing trick! I got soon hooked and bought my first PDA, back in 1995.

Out of nostalgia I tried to get the emulator running again – but without leaving OS X, of course. Thanks to Parallels Desktop this should be easy, I thought. Just create a new virtual machine, install FreeDOS and copy the emulator on it.

The first hurdle was to know which memory driver to load. FreeDOS offers three choices: EMM386, EMM386+EMS and HIMEM XMS. I tried all of them, with 4 MB memory and more. The emulator would never run, but report different errors: Runtime errors, Fatal application error 04 or Unhandled Exception 0D at 00E7:1539 Error Code: 0000. I wasn’t really surprised, as the emulator never worked for me in the “DOS” boxes of any Windows version, because the emulator fiddles with the 640k limit of DOS in incompatible ways.

Before giving up I thought I’d try another road. Tony Chung had success running s3aemul with the bochs emulator under Linux. Bochs itself should be portable, but there is no OS X binary yet of the latest release. So I chose the Windows build and installed it in my XP virtual machine. This time I got lucky and the emulator worked when starting FreeDOS with HIMEM XMS option.

The whole setup reminds me of Babushka Dolls:

Posted in OS X/Windows/Linux | Comments Off on Triple emulation

I’m quite happy with my alien operating system running along my other applications on my Mac. The biggest gripe is the keyboard.

Importing an audio book from CD to the iPod has become a lot easier, thanks to Audiobook Builder.

We got an Alitalia flight with a stopover in Milan Malpensa for our holidays. I must say that we regret having chosen Alitalia.

The negative experiences started already when checking in in Zurich. Our connection flight from Milan was not open yet for a through checkin. No problem, we thought, we’ve got enough time to do that in Milan.

But there was no transfer desk when we arrived in Milan. When you first arrive, transfer desks are sign-posted, but when you get to the desks, there are no more signs. And even before the boarding desk was open, a huge queue started to build up. So I went to a nearby desk and asked, where we could get our boarding passes. Just at the boarding desk, was the answer. When we finally wanted to board, we were told that we had to queue at another desk to get a boarding pass.

Another thing what Malpensa failed to manage: there were no vegetarian meals. The Alitalia cabin crew made it not better by being a bit arrogant: they didn’t really apologise, because it’s not their fault, or is it?

This was not the last of our troubles. Our luggage stayed behind in Milan and we got the phone number of the Alitalia office where we should be able to inquire the status of our luggage. Of course we were nervous to start our trip without our things and tried to call this number early the next day. But only at noon we got through the first time and were told that the luggage would be delivered before eleven in the evening at a friends address. It was only in the evening that this friend was contacted and a few minutes before eleven when we finally got our belongings and the holidays really started.

After all this annoyances I think that “Malpensa” is an appropriate name for this airport: a combination of the Italian words for “bad” and for “thinking”.

How different was our experience in Toronto Pearson when we travelled back home. The airport employee at the boarding desk told the passengers that there is no point to queue yet and how exactly the boarding would happen as soon as a queue started to build. And the security changes (only a couple of hours after the incidents in London last week) were well and transparently organized.

The whole episode reminded us of the joke how to get the worst possible international party: let the English cook, the Italian organise and the Swiss entertain.

Posted in Life/the Universe... | Comments Off on Bad experiences with Milan Malpensa

Posted in Life/the Universe..., The Web | Comments Off on Gimmelwald Gondola

There are already many solutions to the “Santa Claus Problem” by John Trono[1]. It’s a “problem simple to understand and yet far from easy to solve”; the author’s original solution (based on semaphores) was only partly correct. The probably most known analysis of the problem was written by Mordechai Ben-Ari[2], who also provided solutions in Ada95 and Java.

This is the original problem description:

Santa Claus sleeps in his shop up at the North Pole, and can only be wakened by either all nine reindeer being back from their year long vacation on the beaches of some tropical island in the South Pacific, or by some elves who are having some difficulties making the toys. One elf’s problem is never serious enough to wake up Santa (otherwise, he may never get any sleep), so, the elves visit Santa in a group of three. When three elves are having their problems solved, any other elves wishing to visit Santa must wait for those elves to return. If Santa wakes up to find three elves waiting at his shop’s door, along with the last reindeer having come back from the tropics, Santa has decided that the elves can wait until after Christmas, because it is more important to get his sleigh ready as soon as possible. (It is assumed that the reindeer don’t want to leave the tropics, and therefore they stay there until the last possible moment. They might not even come back, but since Santa is footing the bill for their year in paradise… This could also explain the quickness in their delivering of presents, since the reindeer can’t wait to get back to where it is warm.) The penalty for the last reindeer to arrive is that it must get Santa while the others wait in a warming hut before being harnessed to the sleigh.

As an exercise to learn the java.util.concurrent package of Java J2SE 5.0 I implemented another solution using barriers (CyclicBarrier objects). As either three elves or all nine reindeer must assemble before they are allowed to wake Santa, this seems to me an obvious choice.

The solution consists mainly of an outer class SantaClaus, that sets up all needed synchronisation variables and controls the program termination, and two inner classes Elf and Reindeer, that are instantiated on a separate thread for each individual elf and reindeer behaviour. The source code is also available as syntax coloured HTML; an earlier version without the harnessing part can be found here.

The barrier that manages the grouping of the elves is protected by a Semaphore queueElves with three permits. This implements the requirement “any other elves wishing to visit Santa must wait for those elves to return” in a rather defensive manner: there is some virtual waiting room for the elves to wait before waking Santa that has room for only three elves.

This defensive approach makes the priority requirement (if nine reindeer and three elves are waiting, Santa must deliver toys first) simple to fulfill; a fair semaphore (semaphore with a FIFO queue) is enough:

Using a fair semaphore also for queueElves guarantees that no elf is starved when he would like to consult with Santa.

If we would want the get rid of the queueElves semaphore or expand the problem (eg. Santa could start answering the letters from kids), we had to replace the semaphore santasAttention with a advanced mechanism like a PriorityBlockingQueue to guarantee priority for the reindeer.

[3] This assumes that the short time between having realised that there are enough (elves/reindeer) to wake Santa and Santa coming out of his office is indivisible.

At work, we started using dmake in 1991 (or even earlier) for building the firmware for the Vending Machine Controller Euro’90. The firmware consisted mostly of PL/M and C code and the compilers suffered from the DOS limitation of 127 characters per command line. Dennis Vadura’s dmake 3.70 (hosted by the University of Waterloo and available as DOS version) featured the $(mktmp ) macro that let me create any needed temporary config and response files.

Later we kept using dmake for the software for our DIVA and CCI/CSI interface families. The build system had grown quite complex and the makefiles made heavy use of the percent pattern rules and delegation to makefiles in other directories.

A couple of years ago, when I first tried to define a target that builds everything (several firmware variants, debug and release builds), I encountered a strange error from dmake:

The latest release then (dmake 4.1) was labeled as “final free release”; the last dmake homepage from Dennis Vadura (dmake.wticorp.com, online ca. 2001), once tried to sell “dmake Gold”, but was already unreachable at this time. As the days of open source dmake seemed over, I was hesitating to invest time finding bugs and thought that we would move soon to another build system anyway.

Recently (we’re still using dmake…) I have learned that OpenOffice.org has “adopted” dmake and resumed its development. This gave me the energy to finally hunt down this bug: a dangling pointer.

Until my fix is integrated into a future dmake release, you can get the patch from the OpenOffice Issue Tracker.

Posted in Hug-Witschi, Programming | Comments Off on dmake Stories

Posted in Life/the Universe... | Comments Off on Gimmelwald-Lied